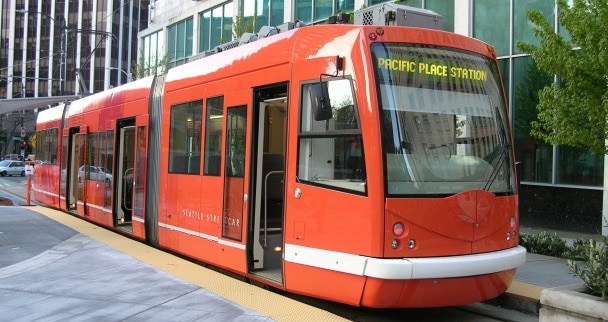 Streetcars were a primary mode of transportation in America’s urban areas at the turn of the last century. In 1902, they carried 5.8 billion trips and provided quality transit service to compact, walkable cities. However, as cars began to dominate the post-war streetscape, streetcars fell from prominence.

Today, tastes in the United States are changing. Or, more accurately, they are leaning back to what they were before. Long commutes and worsening congestion are making urban and walkable lifestyles more desirable. With a changing national demographic that favors the urban life, cities are once again exploring streetcars as a way to catalyze the development and redevelopment of walkable neighborhoods.

Streetcars are more than just a form of transportation: They are city builders. But what type of development best compliments the streetcar? Generally, they are well-suited for higher-density, mixed-use buildings. A variety of mixes may include commercial, office, and residential uses. Residential densities should be at least 20 to 30 units per acre. Meanwhile, densities exceeding 100 units per acre can ensure good ridership.

Still, it’s important to remember that these mixes and densities don’t need to be present from day one. In fact, an essential role of streetcars is to help build such neighborhoods. Once established, they benefit from the ridership they produce. Fixed-transit provides a reliable development environment for private investors and an easy-to-understand first transit experience for new urban dwellers.

Since its earliest conception, the streetcar has changed shape many times. Today, three varieties prevail. Each style has its benefits and drawbacks, but all three can compliment the character of the neighborhoods in which they’re placed.

Single-Family Can Be Urban, Too